Originally from the city of Da Nang, Central Vietnam, nothing predestined Mr Uy to renew the practice of psychology Vietnam: he was born from a very modest family. His parents have a low level of education and worked as market peddlers. Yet Mr Uy took an early interest in psychology. More than purely intellectual motivation, it is the empathy that comes with discipline and the ability to help others that his passion stems from. Sitting straight in his chair, in a corner of his office in Central Saigon, the air infused with the scent of chamomile flowers, the 43-year-old offers a serious and attentive face for the interview. Mr Uy speaks quickly and has a lot to say about his country and the urgent need to develop suitable psychotherapies to help his people, including the poorest.

In 1994, he was in his senior year and then moved to Saigon where he studied and obtained his university degree in psychology.

“When I got out of college, I didn’t feel like I could practice my profession properly, I didn’t have the expertise that a psychologist should have,”

he explains. The desire to always improve himself made him discover different approaches and, over the course of various meetings, he became aware of the failure of the Vietnamese system. After his course in classic psychology, he took advantage of the establishment of a Swiss university to learn about family therapy until 2003.

The family setting is at the heart of Mr Uy’s thinking. For the therapist, the centrality of the family is a precious Asian cultural heritage, however, at times it can take on unhealthy aspects and create strong dependencies within the very relationships between its members. “Children are controlled by parents and even older adults have very serious issues regarding personal identity.”It is not easy, in such an environment, to form an identity of your own. Everything merges in Vietnam: from the individual to the family and even society. “It is essential to work with children and their families,” insists Mr Uy.
Society is another side of the problem. “The political and social state of the country is of great concern to the Vietnamese.” Yet it is difficult, if not impossible to talk about it freely. Worse yet, the government bridle is reproduced in the family circle where parents seek security and control. According to Mr Uy, this phenomenon is rooted in the Vietnamese family tradition without being part of it and imposes a blanket of silence that encloses a whole part of Vietnamese society. The first affected in such a context are obviously those who have everything to lose: the poorest populations of the country.

According to Mr Uy, there are no more than a dozen serious professionals in Vietnam. “Most Vietnamese practitioners read the latest fashionable book and that is enough for them to call themselves experts!” Argues Mr Uy, who does not spare his virulence towards his colleagues. He believes that only those who, like him, were trained in contact with foreigners, have a certain competence. This is as the problem stems directly from teaching in universities. Teachers are relying on an outdated view of psychology and are unaware of the importance of therapy. They only provide the theoretical knowledge that allows a diagnosis to be made but offer no method to truly help and support those diagnosed.

The very status of psychologists is ambiguous in Vietnam. They share with doctors and psychiatrists the name “bac sy” which means “doctor” and are seen as caregivers. They are satisfied with a single consultation during which they deliver a diagnosis and its theoretical resolution without personalised support. A unilateral mode of operation, which does not allow any in-depth work in the form of therapy and is part of the millennial tradition of Vietnamese culture that can be found in many sectors, such as education or political life, in which authority is indisputable.

A Man of Conviction

“In school, the teacher talks, talks, talks, without allowing the slightest intervention on the part of his class or worrying about the progress of each individual student. In psychology, we should do the exact opposite.” Says Mr Uy, advocating for reform of the system: The goal is to remove the current system in which psychology is implemented in the country and instead offer another practice of psychology, based on listening, empathy and sharing.

The unprofessional psychologists, however, should not shoulder all the blame for the lack of effective psychological treatment in the country. The deep ignorance of the population, who often have never heard of psychology or, at best, do not know what to expect during a consultation, are also partially to blame. Admittedly, a few decades ago, this ignorance of psychology was common to all of Asia, but certain countries such as the Philippines, Singapore, Indonesia, and Malaysia were able to catch up quickly. They now offer quality university training. All serious Vietnamese psychologists have studied there or, like Mr Uy, learned from foreigners who came to practice in Vietnam. Most of the other practitioners have neither the curiosity to be interested in foreign approaches nor even the necessary critical eye on the weakness of their own practice. A double paralysis that sustains itself and prevents the development of psychology. However, it would be beneficial in a country where institutions are omnipresent and weigh on the population.

While many of his colleagues now seek fame on the internet and on television in hyper-connected Vietnam, Mr Uy focuses on the urgency of advancing his discipline in his country and helping Vietnamese youth. “In Vietnam, a person is successful and enriched by telling people what they want to hear. Today I am 43 years old, and when I am invited to TV shows, I warn them that I will not deny my beliefs. I am proud to be a rigorous scientist and will not sacrifice ethics for fame,” he says firmly.

But the psychologist is not satisfied with speeches. Away from the cameras, he helps children who have no one to talk to – even those who sometimes never learned to talk.

“Our goal is to empower these children. We realise the grip of the family that muzzles them when we speak with them. Their horizons are totally blocked.”

When asked if they have a dream, they don’t say they don’t have one. It’s much deeper than that: they don’t understand the meaning of the question.

Several times a year, Mr Uy trains local officials of the Children of the Mekong association to help them have a better approach to the youth with whom they help.
Often, certain psychological blockages earn these young people a reputation for laziness or apathy. “It’s true that they don’t have a sense of responsibility. But is it their fault? In daily life, their decision-making power is minimal: decision-making is always monopolised by the generation above and few are those in a real position to take their destiny in their own hands”, explains Mr Uy patiently. For him, the solution almost always lies on the listening side: “We have to listen to these young people to allow them to discover their autonomy and to stop the drain of accountability. Self-awareness would solve many ailments in Vietnamese society”, says Uy.

In 2017, Mr Uy and his colleagues founded the Vietnamese Psychotherapy Association which brings together clinicians, psychiatrists, therapists, and socialworkers. Its objective is to structure professional practice by devising a code of ethics and practice criteria since there is no official body: “In Thailand, psychology is also poorly developed but at least the exercise is licensed. In Vietnam, anyone can call themselves a psychologist!” In addition to his practice, Mr Uy offers training in therapy accessible to all, with or without an academic background. “If they want to become professionals, they have to take a 6-month training course. We just give them the general approach and the practical skills: how to empathize, how to listen…”, he explains.

In addition to the Children of the Mekong volunteers, he also trains instructors in four professional schools of the Salesians of Don Bosco. Finally, he also organises monthly “psycafés”, which are open to the public, to share current events in the field of psychology. Patiently, by multiplying initiatives, Mr Uy tries to change mentalities. The task is immense, but perhaps he will one day be supported by all the young people to whom he has helped to come out of the shadows and take charge of their own existence.

Read our other news from Vietnam

In the midst of the health crisis, the local network for Children of the Mekong offered its services to those most in need: families […] 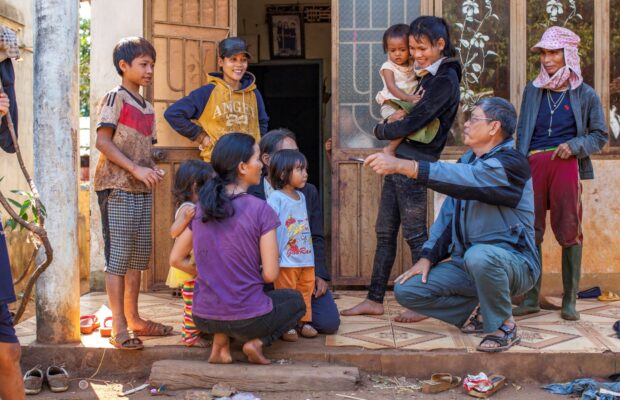 Driven by a deep desire to develop the practice and knowledge of psychology in Vietnam, Mr. Uy is explicit to denounce the inadequacies of […] 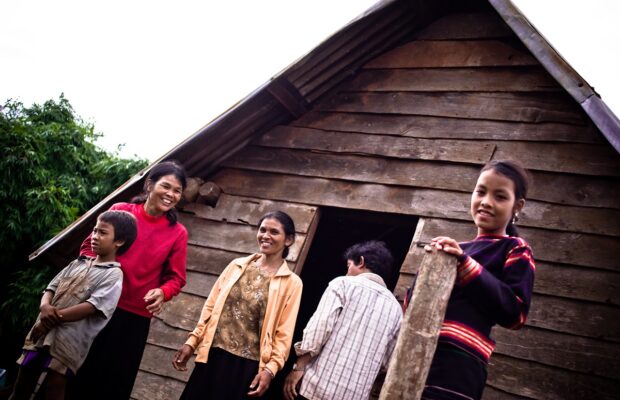 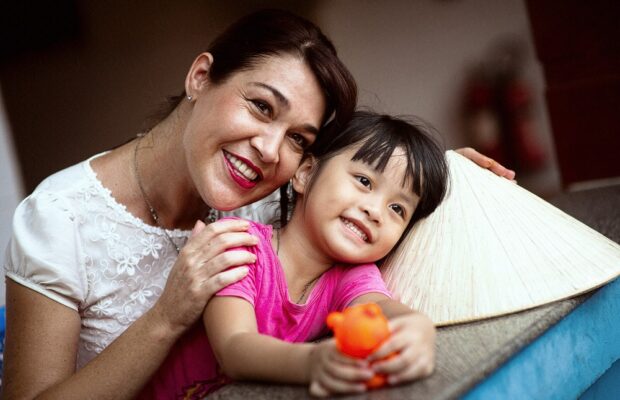 Located at the heart of Vietnam’s second city, Maison Chance (“the lucky house”) is a haven of peace that provides an escape from the […] 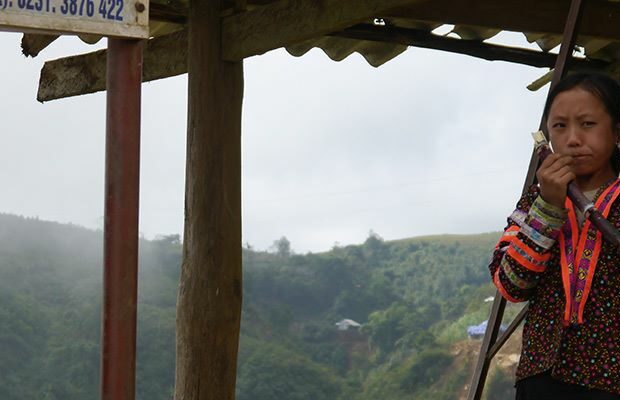 Find out all about the culture and traditions of the Hmong people.