Mam’Percy: storyteller to street children - Children of the Mekong
Go to main content

On Wednesday afternoons, Mam’Percy can be found in Navotas, a coastal suburb in North Manila. The barangay [the local name for the smallest administrative area in the Philippines] is known as Market 3 due to the presence of many seafood markets, which fill the streets with the stench of fish.

Market 3 is not like the rest of Manila. It is where humid air from the city encounters salty winds from the sea. Whereas the horizon in the rest of the metropolis is usually obscured, here it is a jumble of funnels and cranes. Because you have to pay to enter the port, the locals are spared the constant roar of traffic that blights the rest of Manila. Here the atmosphere is different; the lack of urban clamour gives the area a very different feel.

To the sounds of an orchestra of competing sources of electronic music, the local children run about singing, laughing, dancing and shouting whilst around them adults engage in a systematic fashion in the reconstruction of the area – which was hit last October by a fire which destroyed 800 houses in a single night. One month later, the damage were still clearly visible: charred timbers, blackened remains and, above all, a fine layer of ash that settles on clothing and sticks to the skin. The reconstruction work was effective but makeshift. Rather poor in fact, because all the houses were made of flimsy wooden frames to which panels are attached. All manner of tools hammers away, taking pride of place in the babble of sounds that permeate the area.

But the street is also a theatre – a theatre that shows scenes from everyday life which soften the face of poverty, and in which dozens of boisterous children rampaging around take the leading roles. Dressed in a few rags, or even less, with feet and cheeks covered in dust and black with ash, they descend on visitors in a noisy swarm.

It is sitting cross-legged or kneeling in the midst of all this laughing and shouting that Mam’Percy tells her stories; a handful of children listen attentively, seemingly hypnotised by her smiling face and her calm manner.

It soon becomes clear that she is the focal point of all this youthful exuberance and vitality. And what a contrast there is between the raw, pumped-up energy of the children and the calm exuded by this gentle lady in her sixties.

A LIFE OF SERVICE

At 63 years old, Mam’Percy spends every afternoon like this, reading to the children of the shantytowns. The poorest of the poor, they have nothing to their name, but their imaginations remain vivid. Unable to give anything else, it comes completely naturally to Mam’Percy to give her time and attention to others. “It’s what I’ve been doing all my life”, she explains with lowered eyes.

In 1963, when she was only six, her family left Masbate (a city in the Bicol region, which encompasses the southern part of the island of Luzon) for the shantytown of Navotas, a Manila suburb, as did many other families. Her parents were always most charitable. She tells us that her father never hesitated to accommodate new arrivals, even if the small room they called home was already full. “Neighbours used to wake my mother up in the middle of the night to ask for help”, she recalls. When she was 12, she and her family became members of the Legion of Mary, and she started to pay visits to the poor and the sick, as she does to this day.

At the age of 16, she left school in order to help her parents provide for her six younger brothers and sisters. She first worked with her aunt in a baker’s shop and then, two years later, in a clothes shop with her uncle, earning 80 pesos a day. “The pay was terrible, but it was a good shop, with air conditioning”, she recalls, with the gentle look that seems never to leave her face.

At the age of 21, she was working in a jeans factory by day but spending three hours each evening learning to type and studying to be a secretary. In the end, her studies were cut short when she fell in love with a Jeepney driver. They married and had four children between 1980 and 1986. “My husband was a big-hearted man who provided me with wonderful support”, she reminisces. To this day, recalling his death in 2007 still brings tears to her eyes. Family is what gives Mam’Percy her strength.

FROM SOCIAL WORK TO STORYTELLING

Since 1987 she has been active with the Missionaries of Charity in her parish. Getting more and more involved with the passage of time, she has become a well-known figure in all parts of the local area.

In 2000 she started teaching on a voluntary basis at a nursery school – the Pamasawata Learning Center – based in the local chapel and has worked there each morning ever since. Although she can barely make ends meet, at the end of the month, she still makes a contribution to the chapel’s electricity bill! By 2005 some 200 children aged between three and four benefited from her involvement, leading to the establishment of other centres along the same lines. The example set by Mam’Percy has inspired other local women to volunteer, enabling her to widen her activities.

The shantytown of Sawata lies next to a very polluted river. When a team from Hong Kong Doctors arrived in 2006 to provide medical and sanitary aid, it was to Mam’Percy that they turned for help.

Then when sisters from Bonne Nouvelle (a French congregation dedicated to living a life of contemplation in the midst of poverty) came to Sawata, it was again Mam’Percy who made them welcome, developing with the sisters an even stronger relationship. She soon made herself indispensable, joining the sisters in prayer and helping with their social work, with street libraries in particular. So when two former volunteers from France set up the Phil’Book charity to supplement the sisters’ activities with local children, it was only natural that Mam’Percy should be recruited as a street storyteller. She started in 2012 and has displayed exemplary devotion to interacting with the children ever since. The storyteller of the shantytowns runs street libraries four days a week. She puts a huge amount of effort into bringing her stories to life and has time for everyone. She never tires.

Mam’Percy is now 63 years old. Serving others has steadily become an ever more important part of her life, with the result that she is known and respected throughout the barangay. She goes out of her way to show respect for older people, which is a key feature of Filipino society.

“What I aim to achieve with these children is that my charitable example should inspire them, and that they should learn to respect their elders.”

It is important to realise that in the shantytowns where the children grow up there are few adults who set a good example. So for them, Mam’Percy is like a breath of fresh air. Where she leads the way numerous adults also follow, inspired by her charity. In the interest of building bridges between different charities Mam’Percy does not hesitate to enlist the help of young people in her neighbourhood who are sponsored. She takes them along to her storytelling sessions in the street so that they can learn how to take care of younger children. 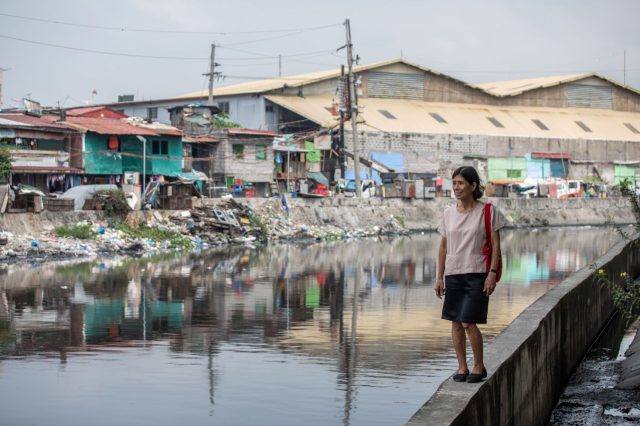 As Mam’Percy makes her way through the narrow, shaded streets of the shantytown, residents of all ages greet her with respect. Young children take her hand and rest it on their forehead as a sign of benediction. Some call her Mam’Percy; others address her as Mum’Percy. The two names seem to blend together, and both suit her fine.

By virtue of her devotion to her community Mam’Percy has been given a seat on the Residents’ Council. The chairman passed away two years ago, and many members would love her to take over, she says, but she has declined their entreaties: “I can’t look after everyone; the children need me”. Asked what lies ahead, Mam’Percy is steadfast: “Every morning I ask the Lord to give me strength, and to find for me additional people who are in need of my help and support.”

Support children's education in the Philippines