The school consists of a number of new buildings, brightly coloured, two houses each for boy and girl dorms, offices and classrooms. There are 77 kids age 11 to 20 (grade 7 – 12) who live in the school as their parents live too far away or are too poor to support them. In addition there are more than 90 day pupils who come to the centre to study, some are sponsored, but not all of them.

The children all attend the village school where they receive basic education. Alas, this basic education is not good enough to get anyone into higher education, be it vocational or university. So the centre gives them additional lessons three times a day. Pretty intense.

The centre is run by a young French couple, Helene and Paul de Castries who are based there for a year as so called Bamboos. Both have totally different jobs in their lives in France and are highly motivated volunteers who are assisted by local staff in running the place. ‘Running’ means everything, from making sure the kids are fed, go to school, are taken to hospital when they are seriously ill. A huge amount of responsibility. How do you deal with the situation where the local doctor says the sick child is OK and can be released from hospital and you instinctively feel there is something wrong? Two hours’ drive to the children’s hospital Kantha Bopha – without their non-medical gut instinct, the child would probably not have survived.

The responsibility also means choosing the next intake of kids to live in the centre. For this, the centre sets kids school tests to see who has academic potential. Next, Helene and Paul talk to the local teachers to see which children are from the poorest backgrounds – and then verify by visiting families in their homes. A process requiring great responsibility as being chosen to be educated can mean the difference between going eventually to university and becoming a teacher or lawyer or working as a 12 year old in the fields or, worse, in Thailand’s “tourism industry”.

I visited on a Sunday and kids were playing, some were painting the classrooms in brighter colours. It was hot, probably 35 degrees or more, no wind, no clouds, no rain for ages even though it is supposed to be the rainy season.

The centre lacks continuous electricity, lacks running water. Neither classrooms nor dormitories have fans to provide some breeze in the stifling heat. Aircon are the open windows. Cooling down means taking a saucepan full of warm water and pouring it over yourself. So there are some urgent investment needs: fans, solar panels, trees, running water.

Being in the countryside, there are snakes, some quite big, others small but not less dangerous, the occasional cobra, many scorpions. Helen and Paul showed me a video how one kid dug with his bare hands in the ground and pulled out a 1.5 meter long fat snake, poisonous, of course. After swinging it around whilst deciding whether to sell or to eat it, the temptation of dinner was stronger in the end. 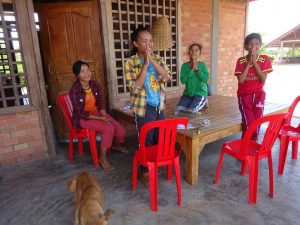 As during my last visit, it was amazing to see how happy and full of energy everyone appeared to be. Definitely a great desire to learn and to make most of their lives.

If you’d like to support the Samrong education centre, or get more information, please click on the link.