With all due respect to Joseph Sanial-Dubay, it is also the sign of a great dish, Pad Thai, (which may be written phat thai or phad thai), a typically Thai stir fry dish. The name, just like the dish and its flavours are quite simple. For a long time, the smell of the stir fired noodles in Thailand’s streets have been attracting gourmets from the whole world. In early 2017, the American news channel CNN even ranked Bangkok best city for street food the second year in a row, ahead of Tokyo and Honolulu. “What makes Bankok’s street food the best in the world is the diversity of the dishes. Other places, like Taipei or Penang also provide great quality street food but nowhere else can you find such a wide range as here.” This is what Chawadee Nualkhair reveals to us. He even created the blog bangkokglutton.com to share his passion for street food. The success of Thai stir-fried noodles is endlessly commented on and shared by amateurs and tourists from all nationalities.

Street food stalls are, above anything strongly linked to a country’s culture and provide a necessary source of income for families in need. “It’s a way of life for the Thai people, expats and tourists. It is an inherent part of Bangkok’s identity and recognised as such worldwide. It is also part of the city’s “chaotic beauty” wrote journalist Suranand Vejjajiva in the Bangkok post. In this context, why would the government be looking to put an end to this national treasure?

In Sathorn, the famous business district of the Thai megacity, high-rise buildings and traditional wooden houses live side by side. In the narrow soi (streets in Thai) bordering the main road, street vendors provide their services to regulars and tourists all day. On the sidewalk, Ning has parked her cart and her son Bo is setting up a few plastic stools around white iron tables. “Everyone in Bangkok has their own recipe for Phat Thai. There is not only one, mutters Ning, hard at work in front of her wok, as if it was the most obvious thing. The secret of my recipe, she adds, is a tamarind sauce which I make myself”. Ning’s recipe is passed down from her grandmother. Born in Issan, one of Thailand’s poorest regions, she decided to move to the country’s capital early on to become a street food vendor. This was a winning bet as while she earned 150 to 250 bahts a day (about £5,5) as a factory worker, today, she manages to earn up to 7000 bahts a day (£160) selling food. This is enough for her to raise her two children properly and live in the area where she works, despite the high cost of housing in the city centre. Ning’s success is quite remarquable, but street food stalls offer many families, especially those who moved away from the countryside, a real chance at making it in the city. However, surviving in the streets is very difficult. One must make with several shady arrangements and be exposed to more or less organised theft. For example, Ning must declare herself to her local police station. In exchange for a monthly payment of 1000 to 2000 bahts (about £45), this way, she is allowed to sell the food she prepares in the street, although it is now forbidden by the administration’s new directives.

A STORM IN THE PLATE

In april of 2017, Vallop Suwandee, one of the Bangkok governor’s advisors, caused a true storm of indignation when he announced that all street food stalls of the Thai capital would disappear in the following months, “even in the touristy areas such as Yaowaraj and Khao San Road”. The street vendors who contribute greatly to the city’s attractiveness suddenly became illegal for public health reasons and to free up the sidewalks. “Do they want Bangkok to loose its soul, to become a city as clean, tidy and lifeless as Singapore ?” wondered at the time a Thai man in his letters from readers of a local newspaper. On the soi 11 of Sathorn, away from political agitation, a small woman has set up shop on the street. Brushed by speeding cars, Nittaya, 65, tells us about her tried and tested recipe from 40 years on the street : rice noodles, shrimps, oil, tofu, eggs, mung been sprouts, lime, spring onions, sugar, spicy peppers and peanuts. She learnt how to cook by watching others.She explains that she used to sell Kanom Thai, Thai cakes in the shape of small balls, but Phat Thai allows her to earn a little more. As she lives alone with her grandson, with no one else to support them, she has decided to learn in the chaos of the capital’s horns and exhaust fumes. With a bright smile, she grabs the cap hanged above her stall and bolts it on her head, shouting cheerfully: “I’ll give you my recipe, but you’ll have to show me the article !” 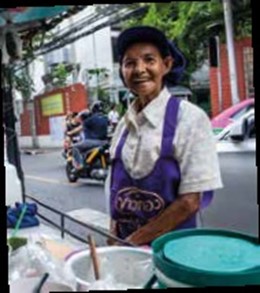