« When I think about where I came from, I would never have imagined ending up here today” says Linthy.  He is a tall and youthful retiree, the father of six children with a serious face which he often hides behind sunglasses.  His eyes light up when he’s engaged in conversation.  Linthy’s glowing kindness and charisma won him the position of president of the Catholic Church’s first lay association in Laos.  We meet him in one of Ventiane cathedral’s side rooms, the only church out of seventeen to avoid nationalization in 1975.  The Society of St. Vincent de Paul (SSVP) couldn’t find a makeshift office to set up in, so it’s amongst the charity’s boxes and packages that Linthy tells us his story.

Linthy’s story is closely connected to that of modern-day Laos.  He was born at the end of 1954 in the northeast of the country, in Xiengkouan province near the Vietnamese border.  A few months previously, France had lost the decisive battle of Dien Bien Phu close by, and in doing so lost their Far-East colonies.  The area is one of rugged terrain and its villagers grow rice using the slash-and-burn method on the mountainsides, Productivity is lower than rice grown in rice fields. ‘My parents were very poor and had a difficult life’ he says.  Their first child, a daughter, dies very young from a lack of medicine.  Linthy is their second and he takes his place as the eldest of five children.  His family belong to the Thai Daeng, or red Thai ethnic group, which is one of the offshoots of the Lao-Thai people.

A REFUGEE IN HIS OWN COUNTRY

Laos and its people, known for their gentle nature, find themselves caught up in the repercussions of the wars in Indochina.  Linthy is just 3 when his parents decide to leave their village home and separate themselves from the rest of their family to escape the growing conflict.  The North Vietnamese army makes frequent inroads into the territory to support the Pathet Lao. The Laotian communist movement had settled into the caves of the neighbouring province of Huaphan.  The army’s support enables them to increase their territory and in 1962 Linthy and his family must again flee and hide in the mountains.  They join the groups of Hmong, the ethnic community fiercely battling against the communists under their famous and dynamic leader: General Vang Pao.

The bombardments in all their horror have begun for Linthy and his unlucky companions. ‘We had to hide in the caves’ while the earth caught fire.  They are caught in the center of the conflict and the area regularly changes control.  ‘One day it’s communist soldiers, the next those of Vang Pao’.  His father decides to join the soldiers under the rebel general.  Linthy remembers Vang Pao with a smile and says ‘One day he gave me 500 kips, and later on I was even invited to his wedding when he married his seventh wife !’

In 1967 the conflict intensifies, and Linthy and his family flee once again, this time further south to the Xaysomboun region. ‘My father had problems with his eyesight and had to leave the army’. Without a regular income, the family’s economic situation worsens.  Then Linthy’s destiny changes: ‘At the age of 12, all I knew was the war and fleeing the war; I’d never been to school !’  His father was the only family member who knew how to read.  An American Catholic priest in contact with the displaced community and who is helping his family suggests his parents send him to school in Ventiane.  As Linthy speaks of the missionary, whose name he prefers to keep to himself, his tone is one of respect. 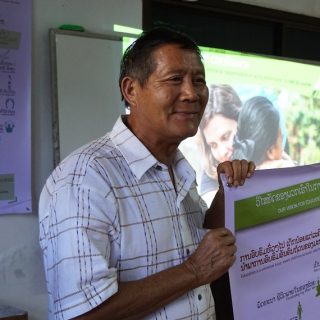 Linthy Program Manager Children of the Mekong in Laos

“At the age of 12, I only knew war and flight; I’ve never been to school before!”

LIFE IN A FOSTER HOME

As he leaves his parents and his younger brothers and sisters, the boy discovers a capital that stills exists in peace and appears to be far from conflict. One year later, it will be his family’s turn to leave Xaysomboun and move to the Vientaine region with the other refugees. Linthy will be able to see them regularly. He is joining the Notre-Dame boarding school, run by French and Laotian priests. There, he is learning how to read and write, following an accelerated schooling programme and is even learning French. During this period, he receives a dental examination by a certain René Péchard, founder of the association Children of the Mekong, who for many years has helped disadvantaged children in Vientaine. “I regularly went to the foster home that René ran to take advantage of the books and games…I discovered Tintin there!”, says linthy, full of life. In 1970, along with a French priest and other young people, Linthy created a foster home, close to the city, for catholic students. His younger sister quickly joined him there. In total there are around 20 of them who live in this mixed community: after classes, they work in the rice field which was entrusted to them and raise poultry and fish to feed themselves. “We don’t have a lot, but the father has taught us to always save a portion for someone less fortunate than us when we have our meals. Every Sunday, we used to organise a visit to a village, hospital or even a prison. We would bring with our food, vitamins and paracetamol because they were the only medicine that we could get hold of”.

The values of sharing that were passed on to Linthy by this priest and this community will leave a mark on his life forever.

In 1975, after the official end of fighting, the communists gradually claimed power throughout the country. At the time, Linthy was 20 years old and in his second year of technical training in metalwork, plumbing and framework. The period which followed the revolution unfolded in a misleading haze: the opposing politicians who could not go into exile were sent by the thousands to re-education camps, many of whom would never come back. All westerners had to leave the country. Over the course of the following three years, like hundreds of thousands of Laotians, the foster home children crossed the Mekong to take refuge in Thailand. Linthy had wished to be able to flee with the others. However, at the request of the French priest, he agreed to put down his name as the owner of the property, to avoid its dispossession by the state. “Had I left the country, the government would have recovered the property and transformed it into a public building, as they did to the churches. So, I stayed here, with my younger sister and the foster home’s cook” who Linthy lovingly calls his “foster mother”.

Despite the difficulties of daily life, Linthy graduated in 1977 and began teaching in the same technical college. In the same year, he married Onesy. His/her parents and other siblings remained in a village with other displaced people, situated on the lands that the inhabitants were willing to leave them upon their arrival. Their situation is particularly unstable, so Linthy proposed that they join him in Vientiane. In total, they moved four families into the foster home, whilst the land they have at their disposal provides them with food security. Their community meets in secret for prayer time and Bible sharing. In 1990, Linthy accepted the Bishop of Vientiane’s offer to work full-time for the Church and stop his teaching occupation. “I was simultaneously a catechist, secretary and handyman for the diocese”, he says. He would go on to assume this role for seventeen years before becoming self-employed as a taxi driver.

After having retired several years ago, he is repeatedly approached by Sister Jesse, a Filipino nun living in Vientiane, who asks him for help in her charitable task. “Our problem was that Catholics were few and far between. So, we wanted to create a movement of secular volunteers who would both offer to serve the poorest as well as provide time for revitalisation“. Bringing together a small group in 2014 – which would officially become the Society of Saint Vincent de Paul (SSVP) of Vientiane in 2017 – its teams visit impoverished families and the sick in working-class neighbourhoods as well as villages on the periphery of Vientiane where new poverty is developing through the rural exodus.

It was at this point that Linthy crossed paths with René Péchard’s successors and discovered that his work had continued in Laos. “I am a ‘child of the Mekong’ myself, so of course I was overjoyed at the opportunity to work with them!” says Linthy. The new programme, which is gradually growing bit by bit, now supports sixteen sponsored children from the working-class neighbourhoods and suburbs of Vientiane. Child sponsorship is a natural transition to SSVP’S work, which helps disadvantaged children who are eager to go to school regardless of their religion. The requests are numerous. Potential families to be helped are chosen according to their economic and social insecurity as well as their motivation to send their children to school.

Knowing where he started from, Linthy is proud of his career. Yet he knows how much he has received and what he owes to others. Humble, he systematically mentions the close colleagues on whom he relies and whom he has been able to surround himself with. The others, the poorest, are the people that Linthy will never stop helping.

Click here for more testimonials from our heroes, the local programme managers.