On 12 February Vietnam celebrates the start of the Year of the Buffalo.

During several days of festivities, the golden dragon will see off any evil spirits that still linger, while the souls of the dead return to Earth – which they can do only during Têt. That is why Têt is first and foremost a family occasion when relatives gather at the family altar to honour their ancestors.

To call it “Chinese” New Year is not right because Vietnam and China share the same lunar calendar.

For lots of Vietnamese workers, Têt is the only time of year at which they can take a holiday, going home to spend ten days or so with their families, visiting family graves, and, for the Buddhists, going to the pagoda.

It is a tradition for children to be given a little red envelope containing a small sum of money, called the Li xi. The first person to cross the threshold should be someone honest and successful, to bring happiness and prosperity to the family in the year to come. The Vietnamese all treat Têt as their “birthday”, so everyone gets to be one year older on the same day!

The festivities start a week before New Year when the three household spirits return to the heavens to give a report about the family’s activities to the Jade Emperor. People leave offerings at their family altars and release live carp into lakes and rivers to facilitate the spirits’ journeys. The offerings are intended to put them on good terms with the Jade Emperor. 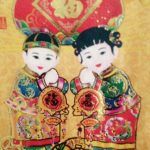 The Vietnamese also visit cemeteries in order to extend invitations to the celebrations to relatives who have already passed away. When the three spirits return to Earth, on New Year’s Eve, the troubles of the year gone by are put to one side, and the festivities can begin. Traditional Têt food includes Banh Chung and Banh Giay, glutinous rice cakes filled with meat and beans, and cooked in banana leaves. Banh Chung is square (the Earth) and Banh Giay is round (the Heavens).

Têt holds a very special place in the hearts of the Vietnamese, who guard its traditions fiercely.

THE LEGEND OF THE RED ENVELOPES

According to legend, there was once an evil spirit (or demon) who came in the night to touch the heads of sleeping children.

The next day the children would wake with headaches or feeling ill.

One day some benevolent spirits (or gods) went to a house where an elderly couple lived with their young son because they knew that the demon would be coming that night.

They transformed themselves into coins which the mother found. She wrapped them in red tissue and slipped them under her son’s pillow. When the demon arrived he was dazzled by the coins and fled.

And that is where the legend of lucky money comes from!

The famous story of Têt cakes!

The story of Têt cakes begins with the sixth Hung king. He had 20 sons and had to decide who would succeed him.

He decided to arrange a cooking competition in which each of his sons was required to prepare him a dish.

They all set off in search of luxury delicacies, except for the eighteenth son, who was a humble peasant (because his mother had died).

He decided to make a simple rice cake, which his father, the king, chose because it represented the staple diet of most of his subjects.

This son thus became the seventh king of the Hung dynasty and Banh Chung (which translates literally as square cake) and Banh Giay (round cake) became festive dishes.

The Têt in photos