The Êde : a Vietnamese minority - Children of the Mekong
Go to main content 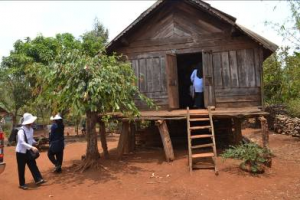 The Ede, also called the Rhade, and sometimes the E-De, Ra De or De, are an ethnic community of about 200 000 people living in Vietnam. They live in the south-eastern provinces of Dak Lak, Gai Lai, Khanh Hoa and Phu Yen. The Rhade language belongs to the Malayo-Polynesian language group.

The Êde live in small villages, usually gathering twenty to fifty houses. Several families live in such Ede villages, which are called “buon” in Rhade. Traditionally, they build long houses on stilts to welcome their extended families.

The head of the family is the Koa Sang, as the Êde are a matriarchal society, the Khoa Sang is the oldest woman in the family. She is in charge of solving family disputes and preserving familial traditions. Not only are the Êde a matriarchal society, but they also follow a matrilineal system, meaning one’s lineage follows the female line and a child will take his or her mother’s name.

When the men get married, they move in with their wife’s family and have little influence on the decisions made by their in-laws. In the unfortunate case that his wife died, it is common for the widower to move in with his sisters.

FARMING IN THE ÊDE MINORITY

The Êde are farming people, and most of their production comes from agriculture. They practice slash-and-burn agriculture, after farming for ten years on the parcel of land they have burnt, they leave it in fallow and move on to another piece of land. They grow a great variety of plants and vegetables alongside squashes and cotton.

They use mixed farming methods, meaning they will plant a great variety of crops in each area they cultivate. This is quite close to some permaculture principles.

Some villages practice swamp rice cultivation, whereby the earth is trampled by buffalos before men plant the rice seedlings. Rice growing is contingent on the right terrain conditions and possible only where large amounts of water are available. 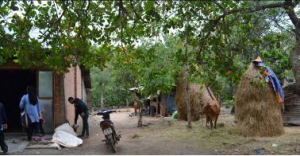 This ethnic group is quite well known as the Êde customs and culture have been studied and recorded by the famous anthropologist George Condominas, who is a specialist of South-East Asian populations.

Traditional crafts are also well developed, the Rhade build their own homes and burial houses which they decorate with ornate wooden sculptures. Their craftsmanship remains for their personal use. They create bowls, pots and other items from clay… In Vietnam, they are recognised as expert basket makers, weavers, and blacksmiths. Very often during the rice harvesting season, the forge runs all day to make and mend the tools needed by the farmers.

The spiritual life of the Êde people is somewhat polytheistic. They worship genies, some being more important than others, with the fire, water rice and earth genies being some of the major ones. Those immortal genies are the guardians of what the Ede people hold dear and are essential parts of their lives.

Education is indeed a challenge for the Êde people. Their wish to both retain their unique culture and maintain their customs and traditions whilst also being part of modern Vietnamese society is difficult.
In public schools teaching is conducted in Vietnamese meaning the Êde childrenmust work even harder to succeed. In this context, due to the lack of adapted teaching methods, it is not rare for children to fall behind, accumulating gaps in their learning and often giving up in the middle of their schooling.

Children of the Mekong supports the Êde, as well as many other ethnic minorities in Vietnam, to allow their children to access education. The boarding house system – which is essentially boarding schools on a small scale where young students receive additional classes – enables children from minorities to catch up on their learning and have a more comfortable experience in state-run schools.

Sponsor a child from an ethnic minority in Southeast Asia