The Hmongs people, ethnic minority in Vietnam - Children of the Mekong
Go to main content

In the middle of the crowd, the appearance of a young girl contrasts with that of the other women dressed in traditional clothing. Sung Thi Dua is carrying a chubby 5-month-old child in her arms. She became pregnant at 14 years old. She and her boyfriend are waiting to reach the legal age to get married: 18 years old for the girl and 21 for the boy. But in the eyes of the village, they are married. It’s an old Hmong tradition: when a man wants to marry a young girl, he invites her to live with him. Hmong weddings have no more ceremony than a big banquet organised for the whole village.

Sung Thi Sang is also 15 years old. She lives next door to Sung Thi Dua. Underneath her traditional outfit, there is a round belly. The teenager is 7 months pregnant. She recently got married to Lo A Lu. Also, her parents-in-law had to sell their only buffalo and borrow 80 kilos of pork, 40 chickens and 40 litres of rice wine to celebrate the marriage. In a time not so long ago, tradition dictated that the man kidnapped the woman and kept her at his house for three days. At the end of the three days, the woman could choose whether or not to stay and marry her suitor. This tradition, which remains strong in the minds of young people, only happens on rare occasions nowadays. But like Sung Thi Dua or Sung Thi Sang, many teenagers get married and fall pregnant very young. 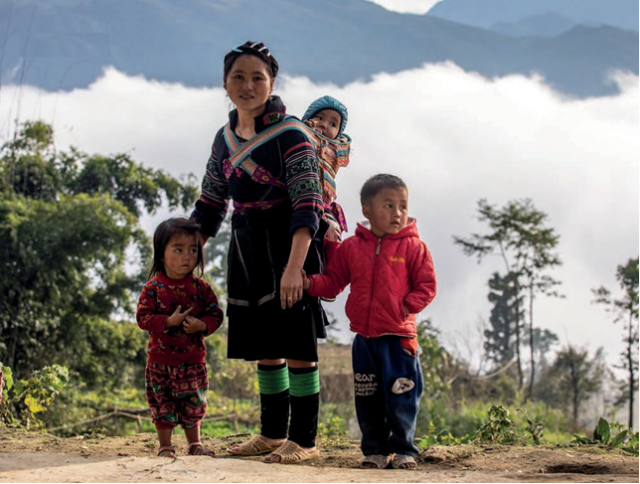 “We have to adapt. We need to distinguish between the customs which are fundamental to our identity and those we need to abandon.”

With a round and friendly face, Joseph sports a flat cap and is wearing a woollen coat. A very western look for this exceptional thirty-year-old, a local boy who comes from the Muong Hoa valley. “In my village, I was the first to go to university!” he announces smiling.

Joseph is also one of the first Hmong to have opened a hotel for tourists in the town of Sapa.

“I want to create a place where tourists can discover our culture and handicraft. All my employees are Hmong.”

Tourism in the town hinges mainly on the attractiveness of the ethnic groups of the region. Tourists are attracted by costumed guides who can accompany them into the mountains to discover the region, which is an easy source of money for families in need.

“However, this is still an unstable activity which doesn’t allow for savings, offers no security, and children are the first victims,” warns Mrs Oanh, a retired teacher. Children have to help with housework and look after themselves. This often leads them to miss school. It is also the case that some children are used by their parents to sell handiwork to tourists.”

From the age of 3, some little girls, dressed in traditional costume, spend their days sitting in front of some trinkets on the cold steps in the main Sapa square.

“In my opinion, education is the key: it’s thanks to my thirst for learning that I was able to change my life.”

However, Joseph was not destined to work in tourism. After studying music in Hanoi, he returned to the mountains and quickly found a teaching position. He found himself confronted by a stifling daily routine: an ill father, colleagues who only play around and drink, and the impossibility of helping his two brothers and three sisters due to not earning enough. He decided to change his life.

His salvation would come by learning English. First of all, by listening to Jack Hope songs on YouTube, then in the hotels where he has managed to find work. The salary is derisory but he takes any opportunity to practise the language of Shakespeare. Today, Joseph is in debt but confident. His business strategy follows the trends and corresponds to the expectations of western tourists. He offers an eco-tourism experience in a stunning setting and is promoting a project to involve his community as much as possible:

“Everyone is poor in my village. I want to change that. »

A few more minutes and, with the setting sun, the mist dragon which never leaves the Sapa highlands will cover its fluffy body with the last rays. In their homes, Sung Thi Dua and Chang Thi Giang rock their babies, Sung Thi Sang caresses her round belly. Already mothers but hardly even women. For them, and for their children above all, the future is still to be written.

SCHOOL IS NOT ONLY AN OPPORTUNITY,

IT IS ALSO A WAY TO SAVE LIVES.

A child whose mother can read or write has a 50% higher chance of surviving past the age of 5. 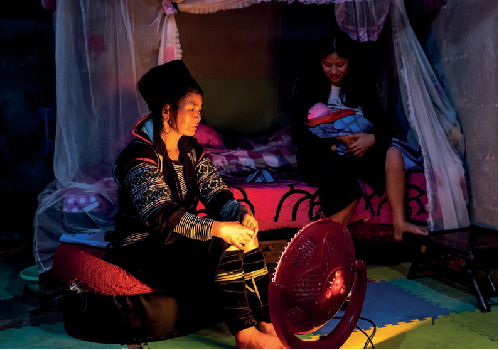