A former British Colony, Myanmar gained independence in 1948. During this period, the young Burmese government promised a secession to its minorities, which represented no less than a third of the country. However, the government went back on its promise of a federal state and ethnic armies organized, particularly among the Karen, Wa, Shan and Kachin populations.

In 1984, clashes and repression caused hundreds of thousands of people to flee to Thailand, making this the longest refugee crisis in history. The latest ones have been spread out into 9 camps along the Thai border.

The 2000s marked a turning point for Myanmar who entered a phase of political transition with the election of Aung San Suu Kyi in 2010. Despite the rise of civilian rule in Myanmar, only a few changes appear to have occurred. The military retains control of the Ministries of Defense, Interior and Borders, leaving Aung San Suu Kyi little room to lead.

However, on October 15, 2015, the Burmese government and 8 rebel groups, with the exception of the KNPP, signed an international ceasefire agreement, the first step for a process for peace. A fragile situation during which gunshots were still heard. “We had a lot of hope that year, at the time of the discussions between the representatives of the ethnic groups and the Burmese government,” said a representative of an NGO who wishes to remain anonymous, “today, things are stagnating, and we are considering a third solution for the future of the refugees.”

At the beginning of the crisis, refugees had the possibility of being placed in a third-party country. Some took their chance in Thailand at the risk of being arrested for illegally residing in the country.

Between 2004 and 2009, there have been 50,000 people placed in the United States, Australia, Canada, New Zealand, The Netherlands, Finland, Norway, and Sweden. However, after such a long period of crisis, the traditional host countries, with the notable exception of Canada, such as the United States and Australia, reduced their quotas to the point of not welcoming them anymore. “The urgency for them has shifted to the Middle East,” according to our source.

At this stage of the crisis, integration is not a feasible solution. “Thailand is a law-abiding country; without the proper documents it is impossible to take up residence there. Some refugees took their chance there despite the high risk of getting arrested,” one source said.

From a legal standpoint, the residents of the camps have the status of “refugee” while they stay there. Outside, they are considered illegal immigrants and are at risk of spending many years behind bars in Bangkok’s immigration detention centre. However, while Thailand is often criticized for not having signed the Geneva Convention, the country has a long and deep-rooted tradition of welcoming refugees from its border countries who are fleeing from conflict. It has welcomed close to 3 million people since their neighbouring countries were at war.

This situation that has been unresolved for 34 years might now have a solution: bringing back the refugees to Myanmar. However, NGO’s and ethnic leaders are firm on the conditions of this potential return. It must be done with respect for the law, in complete safety, voluntarily and with dignity. “Peace is so fragile,” said an NGO representative, “everything hinges on the outcome of the negotiations. Today, it is impossible for me to give you a precise date for this return. But we sincerely hope that it will be possible because there is no other option for these people who have been uprooted for years”. For the time being, NGOs speculate that the negotiation process will not be completed for another three years. The Myanmar government has made it clear that it is not ready to accept its nationals. Thailand, for its part, assures that it will continue to take charge of the refugee camps for as long as it will be necessary.

The return of the refugees, if possible, will proceed in 3 steps: First, the preparation of the journey. Second, the journey itself. Third and last, integration. Many of the disputed issues are about negotiations, notably the complex legal issues on the status of refugees who have not been registered.

“Since the ceasefire, new arrivals and children born in the camps are no longer registered with the UN. They are left without papers and stateless.”

The issues of territorial control and the mines that are destroying the road are also being debated.

Without a doubt, the return of the refugees will not happen overnight. However, to this effect, NGOs are starting to withdraw from the area while the situation in the camps remains unchanged.

The ceasefire caused the reduction of international and financial aid. NGO’s are starting to evacuate the area causing a rapid decrease in assistance such as education, health, water etc.  Three NGO’s have left, including the French NGO Solidarité, which did so 3 years ago. The departures are not made in an anarchic nor brutal way.  There are guidelines and procedures before departing. The NGO should first inform the other NGO’s, and camp leaders then survey and transfer their programs to other associations so then they can find other NGO’s who can replace them.

The 9 camps along the Myanmar-Thailand border are on life support.  The lives of these constrained refugees depend on the living allowances from the HCR and NGOs. Yet, the amount allocated is not sufficient to cover the cost of living. In 2013, the HCR had already announced the dramatic consequences a decrease in funding would have against these populations. “Since 2014, there has not been enough food for everyone”, said Anne Zutterling, a volunteer of Children of the Mekong who has been present in the camps a year ago. Undoubtedly, aids have drastically diminished. “The rations of rice have been reduced from 17 kg to 7 kg, the quantity of oil and sugar has been reduced as well.” The same follows regarding health issues “before, there was a small clinic with permanent nurses.  Now, a doctor comes by every week, and the number of medicines available is reduced.”

This financial hardship goes along with the uncertainty of the future that wavers between the hope of a return and the echoes of arms on the side of Myanmar. According to the NGOs, anxiety is unmistakable among the refugees, causing social violence that the associations are trying to deal with. “Men are becoming violent, children are going to school less and less, all against a backdrop of alcohol and drugs,” said Anne Zutterling gloomily. The highly vulnerable population are the associations’ priority, whether they are children, the disabled or the elderly.    The Karen Women Organisation carries out awareness campaigns to prevent domestic violence.

In March 2018, tensions reached their peak in the Karen-controlled area. According to the KNU (Karen National Union) , an ethnic army, government forces would have illegally entered into Karen territory to rehabilitate the military road linking Ler Mu Plaw to Kay Bu, causing 1,700 villagers to leave. The death of Saw O Moo, a member of the NGO Karen Environmental and Social Action, set the world on fire on April 5, 2018.  According to witnesses, he was shot by Myanmar soldiers. This alleged assassination led to regular clashes between the KNU and the army, causing the once celebrated ceasefire to collapse.

However, NGOs are cautious: “We refuse to talk about a breakdown in the ceasefire because a peaceful way to resolve the conflict is still possible. Negotiations continue, and we will continue our humanitarian action to this end.” The NGO keeps its guideline and aims for refugees to return to their country by preparing them to become self-sufficient. To achieve this, practical courses in agriculture, animal husbandry and farming, as well as in house-building, have been set up.” The return home is close for some refugees but still just a pipe dream for some others.

TO FIND OUT MORE ABOUT REFUGEE POPULATIONS: 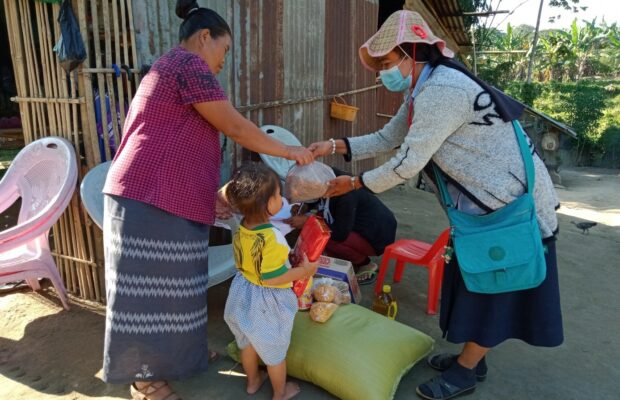