When we arrived in this Burmese village, tens of children rushed up to welcome us and direct us towards the main square overlooking the whole valley. They took my hands and those of my tour guide, delighted to see new faces. The village chief then came to greet us.

Tum, my tour guide, started to give out the things we had bought that morning: inflatable balloons and cakes. I observed the scene: the children seemed so happy to receive these presents, their eyes gleaming with joy. The view I was observing was striking and made me think of those at home who would be swamped with Christmas presents in a few weeks.

The children ate their precious snacks and played with their balloons. After that, I began to take some photos. The children went one by one in front of my lens, and then it was the adults’ turn. They wore no makeup and had unclean and unironed clothes yet I thought they were quite beautiful. They had a natural essence which I appreciated above all else.

The children were shy at first, however, soon became amused when they saw themselves on my camera screen. Whereas the children were more carefree and natural in their poses, the adults preferred to pose more seriously in order to be as attractive as possible.

We then set off to drink some tea in a house owned by my tour guide’s friend. He lived there with his wife, children and father. Along the way, I came across three little girls from the previous group we encountered, including one who had caught my attention right from our arrival in the village. She was adorned in a dirty outfit and had a blackened but perfect face and tousled hair; I thought to myself that the child was beautiful. It turned out that she was the youngest daughter of the family we were going to meet. Before entering the house, I asked her to stay near the doorstep so I could photograph her. Her demeanour expresses her shyness, but her look is one of curiosity. The door seemed to offer her protection. Her sisters watched the scene, amused. 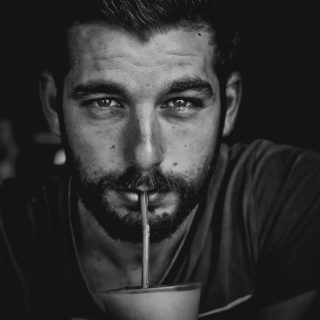 Originally from Moncrabeau, near Agen, in Lot-et-Garonne (France), Tom found his passion for photography in 2011. He admires the fantastic photos of Rehahn Croqueville, Steve McCurry and Jimmy Nelson. He began travelling at a young age to discover and meet extraordinary, smiling and engaging people. He specialises in capturing the diversity of ethnic groups.

Above all, taking travel photos is all about meeting people and spending time with them! It is even more necessary for you to spend a few moments playing with the children or bringing them a present so that they trust you. Once their trust is gained, you will always be rewarded with magnificent photos! It is essential to allow them to express themselves without posing in order to bring out their sincere and pure looks.